1. A newly hired network technician is given the task of ordering new hardware for a small business with a large growth forecast. Which primary factor should the technician be concerned with when choosing the new devices?

devices with a fixed number and type of interfaces

devices that have support for network monitoring

devices with support for modularity*

2. Which network design consideration would be more important to a large corporation than to a small business?

4. A network administrator for a small company is contemplating how to scale the network over the next three years to accommodate projected growth. Which three types of information should be used to plan for network growth? (Choose three.)

human resource policies and procedures for all employees in the company

documentation of the current physical and logical topologies*

analysis of the network traffic based on protocols, applications, and services used on the network*

history and mission statement of the company

inventory of the devices that are currently used on the network*

listing of the current employees and their role in the company

Capture traffic on the weekends when most employees are off work.

Only capture traffic in the areas of the network that receive most of the traffic such as the data center.

Capture traffic during peak utilization times to get a good representation of the different traffic types.*

Only capture WAN traffic because traffic to the web is responsible for the largest amount of traffic on a network.

6. Some routers and switches in a wiring closet malfunctioned after an air conditioning unit failed. What type of threat does this situation describe?

7. Which type of network threat is intended to prevent authorized users from accessing resources?

8. Which two actions can be taken to prevent a successful network attack on an email server account? (Choose two.)

Never send the password through the network in a clear text.*

Never use passwords that need the Shift key.

Use servers from different vendors.

Distribute servers throughout the building, placing them close to the stakeholders.

Limit the number of unsuccessful attempts to log in to the server.*

9. Which firewall feature is used to ensure that packets coming into a network are legitimate responses initiated from internal hosts?

10. What is the purpose of the network security authentication function?

to require users to prove who they are*

to keep track of the actions of a user

to provide challenge and response questions

12. What is the purpose of using SSH to connect to a router?

It allows a router to be configured using a graphical interface.

It allows a secure remote connection to the router command line interface.*

It allows the router to be monitored through a network management application.

It allows secure transfer of the IOS software image from an unsecure workstation or server.

13. Which two steps are required before SSH can be enabled on a Cisco router? (Choose two.)

Give the router a host name and domain name.*

Create a banner that will be displayed to users when they connect.

Generate a set of secret keys to be used for encryption and decryption.*

Set up an authentication server to handle incoming connection requests.

Enable SSH on the physical interfaces where the incoming connection requests will be received.

14. What is the purpose of issuing the commands cd nvram: then dir at the privilege exec mode of a router?

to direct all new files to the NVRAM

to copy the directories from the NVRAM

15. Which command will backup the configuration that is stored in NVRAM to a TFTP server? 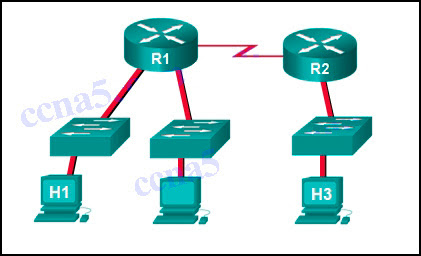 Connectivity between H1 and H3 is fine.

H3 is not connected properly to the network.

Something is causing interference between H1 and R1.

Performance between the networks is within expected parameters.

Something is causing a time delay between the networks.*

17. When should an administrator establish a network baseline?

when the traffic is at peak in the network

when there is a sudden drop in traffic

at the lowest point of traffic in the network

at regular intervals over a period of time* 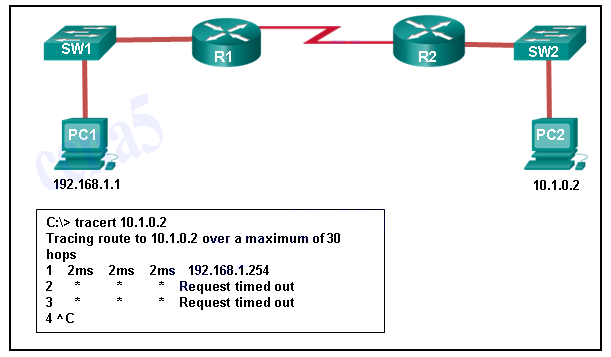 19. Which statement is true about CDP on a Cisco device?

The show cdp neighbor detail command will reveal the IP address of a neighbor only if there is Layer 3 connectivity.

To disable CDP globally, the no cdp enable command in interface configuration mode must be used.

CDP can be disabled globally or on a specific interface.*

Because it runs at the data link layer, the CDP protocol can only be implemented in switches.

20. A network administrator for a small campus network has issued the show ip interface brief command on a switch. What is the administrator verifying with this command?

that a specific host on another network can be reached

the default gateway that is used by the switch

21. A network technician issues the arp -d * command on a PC after the router that is connected to the LAN is reconfigured. What is the result after this command is issued?

The ARP cache is cleared.*

The current content of the ARP cache is displayed.

The detailed information of the ARP cache is displayed.

The ARP cache is synchronized with the router interface.

22. A network technician issues the C:\> tracert -6 www.cisco.com command on a Windows PC. What is the purpose of the -6 command option?

It forces the trace to use IPv6.*

It limits the trace to only 6 hops.

It sets a 6 milliseconds timeout for each replay.

It sends 6 probes within each TTL time period.

23. Which command should be used on a Cisco router or switch to allow log messages to be displayed on remotely connected sessions using Telnet or SSH?

24. Fill in the blank.
VoIP defines the protocols and technologies that implement the transmission of voice data over an IP network

25. Fill in the blank. Do not use abbreviations.

The show file systems command provides information about the amount of free nvram and flash memory with the permissions for reading or writing data.

26. Fill in the blank. Do not use abbreviations.

The show version command that is issued on a router is used to verify the value of the software configuration register.

27. Match the type of information security threat to the scenario. (Not all options are used.)

Place the options in the following order.