1. What specialized network device is responsible for enforcing access control policies between networks?

C. Firewalls are used to permit or block traffic between networks according to access control policies.

2. What information does an Ethernet switch examine and use to build its address table?

3. Which device is an intermediary device?

4. Which statement describes a difference between RADIUS and TACACS+?

C. TACACS+ uses TCP, encrypts the entire packet (not just the password), and separates authentication and authorization into two distinct processes. Both protocols are supported by the Cisco Secure ACS software.

5. Which wireless parameter refers to the frequency bands used to transmit data to a wireless access point?

D. An access point can be manually set to a specific frequency band or channel in order to avoid interference with other wireless devices in the area.

C. Intrusion detection systems (IDSs) use a set of rules, referred to as signatures, to identify malicious traffic on the network.

7. What type of physical topology can be created by connecting all Ethernet cables to a central device?

A. Devices connected to the Ethernet star topology connect to either a hub or a switch.

8. Which network service synchronizes the time across all devices on the network?

C. There are two methods that can be used to set date and time settings on network devices. Manual configuration and automatically using the Network Time Protocol (NTP). NTP keeps the time across all devices synchronized by using a hierarchical system of sources.

B. SNMP is an application layer protocol that allows administrators to manage and monitor devices on the network such as routers, switches, and servers.

10. What are two types of addresses found on network end devices? (Choose two.)

Intermediary devices use two types of addresses when sending messages to the final destination device, MAC and IP addresses. TCP and UDP are protocols used at Layer 4 to identify what port numbers are being used on the source and destination devices. A return address is used when mailing a letter, not in networking.

11. Which OSI layer header is rewritten with new addressing information by a router when forwarding between LAN segments?

12. Which protocol provides authentication, integrity, and confidentiality services and is a type of VPN?

IPsec services allow for authentication, integrity, access control, and confidentiality. With IPsec, the information exchanged between remote sites can be encrypted and verified. Both remote-access and site-to-site VPNs can be deployed using IPsec.

ACLs can control which areas a host can access on a network.*
ACLs provide a basic level of security for network access.*
Standard ACLs can restrict access to specific applications and ports.
ACLs can permit or deny traffic based upon the MAC address originating on the router.
ACLs assist the router in determining the best path to a destination.

14. Which protocol or service is used to automatically synchronize the software clocks on Cisco routers?

15. What is the only attribute used by standard access control lists to identify traffic?

Standard access control lists can only identify traffic based on the source IPv4 address in the protocol header.

16. Which wireless parameter is used by an access point to broadcast frames that include the SSID?

The two scanning or probing modes an access point can be placed into are passive or active. In passive mode, the AP advertises the SSID, supported standards, and security settings in broadcast beacon frames. In active mode, the wireless client must be manually configured for the same wireless parameters as the AP has configured.

17. A Cisco router is running IOS 15. What are the two routing table entry types that will be added when a network administrator brings an interface up and assigns an IP address to the interface? (Choose two.) 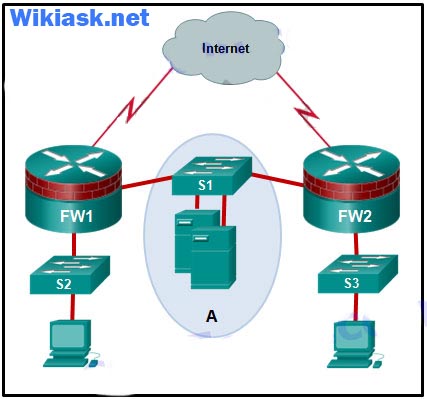 The network “A” contains multiple corporate servers that are accessed by hosts from the Internet for information about the corporation. What term is used to describe the network marked as “A”?

A demilitarized zone or DMZ is a network area protected by one or more firewalls. The DMZ typically contains servers that are commonly accessed by external users. A web server is commonly contained in a DMZ.


For detecting malicious activity, an IPS uses a set of rules called signatures to detect patterns in network traffic.

20. Which two features are included by both TACACS+ and RADIUS protocols? (Choose two.)

Both TACACS+ and RADIUS support password encryption (TACACS+ encrypts all communication) and use Layer 4 protocol (TACACS+ uses TCP and RADIUS uses UDP). TACACS+ supports separation of authentication and authorization processes, while RADIUS combines authentication and authorization as one process. RADIUS supports remote access technology, such as 802.1x and SIP; TACACS+ does not.

21. What does the TACACS+ protocol provide in a AAA deployment?

TACACS+ utilizes TCP port 49, provides authorization on a per-user or per-group basis, encrypts the entire packet, and does not provide compa​tibility with previous TACACS protocols.​

22. Which parameter is commonly used to identify a wireless network name when a home wireless AP is being configured?

The SSID is used to name a wireless network. This parameter is required in order for a wireless client to attach to a wireless AP.

23. What information within a data packet does a router use to make forwarding decisions?

A Layer 3 device like a router uses a Layer 3 destination IP address to make a forwarding decision.

24. Which protocol creates a virtual point-to-point connection to tunnel unencrypted traffic between Cisco routers from a variety of protocols?

Generic Routing Encapsulation (GRE) is a tunneling protocol developed by Cisco that encapsulates multiprotocol traffic between remote Cisco routers. GRE does not encrypt data. OSPF is a open source routing protocol. IPsec is a suite of protocols that allow for the exchange of information that can be encrypted and verified. Internet Key Exchange (IKE) is a key management standard used with IPsec.

25. Which two statements are true about NTP servers in an enterprise network? (Choose two.)

NTP servers at stratum 1 are directly connected to an authoritative time source.*
NTP servers ensure an accurate time stamp on logging and debugging information.*
There can only be one NTP server on an enterprise network.
All NTP servers synchronize directly to a stratum 1 time source.
NTP servers control the mean time between failures (MTBF) for key network devices.

Network Time Protocol (NTP) is used to synchronize the time across all devices on the network to make sure accurate timestamping on devices for managing, securing and troubleshooting. NTP networks use a hierarchical system of time sources. Each level in this hierarchical system is called a stratum. The stratum 1 devices are directly connected to the authoritative time sources.

26. What is true concerning physical and logical topologies?

27. Which layer of the hierarchical design model is a control boundary between the other layers?

28. Which protocol or service allows network administrators to receive system messages that are provided by network devices?

Cisco developed NetFlow for the purpose of gathering statistics on packets flowing through Cisco routers and multilayer switches. SNMP can be used to collect and store information about a device. Syslog is used to access and store system messages.
NTP is used to allow network devices to synchronize time settings.

29. What is a function of a proxy firewall?

Proxy firewalls filter traffic through the application layer of the TPC/IP model and shield client information by connecting to remote servers on behalf of clients.

30. What is the function of the distribution layer of the three-layer network design model?

In a star network topology end devices are connected to a central intermediate device such as a hub or a switch.

32. Which device can control and manage a large number of corporate APs?

A wireless LAN controller (WLC) can be configured to manage multiple lightweight access points (LWAPs). On the WLC, a network administrator can configure SSIDs, security, IP addressing, and other wireless network parameters in a centralized management environment.

33. For which discovery mode will an AP generate the most traffic on a WLAN?

The two discovery modes are passive and active. When operating in passive mode, an AP will generate more traffic as it continually broadcasts beacon frames to potential clients. In active mode, the client initiates the discovery process instead of the AP. Mixed mode refers to network mode settings, and open mode refers to security parameter settings.

34. What is a feature of the TACACS+ protocol?

It utilizes UDP to provide more efficient packet transfer.
It hides passwords during transmission using PAP and sends the rest of the packet in plaintext.
It encrypts the entire body of the packet for more secure communications.*
It combines authentication and authorization as one process.