3. What is a possible use for virtual computing?

to allow computer hardware to be tested

to allow computer hardware upgrades to be tested

to allow ROM firmware upgrades to be tested

5. What is the correct disposal process of old computer batteries?

They should be burned because they do not decompose.

They can be refilled and reused.

They should be placed in an airtight container and then thrown away in the regular garbage.

They must be recycled because they are harmful to the environment.*

Because they will decompose harmlessly, they should be thrown away in the recycling bin.

6. Which two procedures can help protect against ESD when working on a computer system? (Choose two.)

the use of an antistatic wrist strap*

the use of magnetized tools

the use of an antistatic mat*

the use of safety glasses

the use of polyester clothing

7. Which software tool will protect against viruses and spyware on a Windows PC?

8. Which cleaning material should be used to clean component contacts?

9. A technician is troubleshooting a problem where many websites return a “certificate not valid” error. The technician notices that the date and time are not current and resets these to the correct settings. The previously inaccessible websites are now accessible. However, when the computer is restarted the same problem reoccurs. What can the technician do to prevent the date and time from resetting?

Change the power settings in the BIOS.

10. When a new motherboard is being installed, between which two components must thermal compound be applied? (Choose two.)

11. Which solid-state storage technology allows a computer BIOS to be upgraded by flashing?

12. Which two existing components must be compatible with the installation of a new upgraded CPU? (Choose two.)

13. What are three important considerations when installing a CPU on a motherboard that has just been upgraded? (Choose three.)

The CPU is correctly aligned and placed in the socket.*

The CPU contacts are first cleaned with isopropyl alcohol.

The CMOS battery is removed prior to installing the CPU.

Maximum insertion force is applied to the load lever so that the CPU is locked in place.

14. A specific computer has an issue that could not be resolved by the help desk technician. The on-site technician finds that Windows updates have been disabled. The technician re-enables the update service, configures the computer for automatic updates, downloads and installs all missing updates, ensures the computer boots successfully, and verifies with the customer that the issue has been resolved. Which step, if any, is next?

Document the findings, actions, and outcomes.*

No further action is needed.

Establish a plan of action to resolve the problem and implement the solution.

Test the theory to determine the cause.

15. What should a technician do before beginning any troubleshooting steps on a customer computer?

Establish a plan of action.

16. Which document can be signed by both a user and a computer repair shop to release the shop from backing up user data?

17. A technician is troubleshooting a 4-year-old computer that takes a long time to boot, and identifies that the BIOS rediscovers all the hardware at every boot. What action would fix this problem?

Start the computer with the last known good configuration.

18. Which location on a hard disk is used by the BIOS to search for operating system instructions in order to boot a PC?

19. A technician is asked to set up one hard drive that will support two operating systems and will store data files in three separate drive locations. Which partition settings will support these requirements?

20. A user installs a new sound card driver in a computer that is working properly. After the installation of the drivers for the new sound card, the computer fails to boot. Which quick fix can the user implement to return to the previous working state?

21. A technician uses the shrink volume feature of the disk management utility and splits the partition. What must the technician do next in order to make use of the new space?

Delete all partitions and reinitialize the disk.

Convert the unallocated space into a dynamic disk.

22. A technician is using the six troubleshooting steps in an attempt to repair a PC. After completing the steps needed to test a theory and determine the cause, the technician still has not solved the problem. Which two steps are likely to be taken next by the technician to establish a plan of action and resolve the problem? (Choose two.)

Ask other users in the area.

Speak with the supervisor of the user.

23. On a computer that will not boot, which two actions are recommended in the troubleshooting process after verifying the obvious issues such as power to the computer and display, non-bootable media, and the BIOS boot order options? (Choose two.)

Use the Last Known Good Configuration.*

Replace computer components one at a time until the problem is solved.

24. What are the four layers in the TCP/IP reference model?

25. What is the distance limitation of a single data run for UTP cabling without adding networking devices?

26. What is the default subnet mask for a Class A network?

27. Which network protocol is used to automatically assign an IP address to a computer on a network?

29. What are two network requirements necessary to establish a VPN connection between a remote computer and a private company LAN? (Choose two.)

An intrusion detection system works inline and has the ability to drop malicious traffic.

33. Where can a technician enable ACPI mode on a laptop?

34. Which two actions must be performed before installing RAM into a laptop? (Choose two.)

Use thermal compound to attach the memory to the motherboard.

Before installing the RAM, update the saved CMOS settings to the newly configured amount of RAM.

Disconnect the display from the bottom of the laptop.

Remove the memory module retaining clips from the slots where the new RAM will insert.

35. Which two items would be part of a laptop preventive maintenance kit? (Choose two.)

36. What is the purpose of running mobile device apps in a sandbox?

to enable the phone to run multiple operating systems

to prevent malicious programs from infecting the device*

37. In what two situations is a virtual printer used? (Choose two.)

A user sends a printed document to a remote destination through the cloud.*

A remote user sends a document to a local user who prints the document using the company laser printer.

A corporate user prints to a centralized printer on the same floor, but on a different network.

A document is printed to a PDF or other file type.*

A document is sent to a printer that is connected to the USB port of a co-worker on the same network.

38. A user has installed a new printer. Which two pieces of information about the printer operation are provided by printing a test page from the computer? (Choose two.)

confirmation that the color calibration is optimized

confirmation that printer and computer are communicating*

39. A technician wants to add a new shared network printer to a computer. The printer is not shown in the list of available printers. What two actions can the technician take to add the printer? (Choose two.)

Access a command prompt and use the net use command to locate the printer and printer path.

Browse for the printer on the network.*

Enter the name of the computer used to share the printer.

40. A technician is installing a new printer in a cool, damp environment. After the printer cabling is done, and the software and print driver are installed, the printer test page jams. What is the most likely cause of the print failure?

41. What type of security attack is being launched when a hacker calls a company to obtain computer login information and pretends to be an employee?

42. Which two aspects of a computer can be protected by setting the BIOS password? (Choose two.)

Set the folder permissions to Read.

Set the file permissions to Modify.

Set the file permissions to Read and Execute.*

44. The PC support person has heard of an instance where departmental secretaries go to lunch and leave their computers unlocked and remain logged into their account. Which Windows feature would the technician use to help in this situation?

45. After confirming the removal of a virus from a computer, how should the technician ensure and verify the full functionality of the system?

Check for the latest OS patches and updates.*

Document the problem and the procedures performed to solve it.

Talk with the user to determine the cause of the problem.

Gather information from a number of sources to clearly identify the problem.

Verify that the computer is working properly now.

Listen to the complaint and then apologize for any inconvenience caused by the lengthy service on the computer.*

Explain that the repair technician sent to perform the service is inexperienced.

Put the customer on hold until a supervisor is available.

This file should not be shared with the level two technician.

Replace all passwords in the file with <password omitted> before emailing the file and then supply the passwords by secure means, if required.*

Send the file as it is to the level two technician.

Deliver the file in printed format only.

48. What determines the level of support that a call center technician will provide to an individual customer?

Support is based on the SLA for that customer.*

All customers receive the same level of support by the call center.

A level one technician will provide a higher level of support than a level two technician.

An individual call center technician chooses the level of support based on the time available to assist the customer.

49. After resolving an intermittent CD-ROM drive fault by firmly reconnecting a loose cable, the technician then decides to inspect all other cable connections to prevent other faults from occurring. Which two conditions will help to prevent future cable and connector faults? (Choose two.)

There are no missing or bent connector pins.*

Cables are stretched tight between connectors.

Cables are not bent sharply around adapter cards.*

The connector retaining screws have been over tightened with a screwdriver.

50. A technician has been asked to reinstall the OS on a computer that has a corrupted operating system. The technician inserts the installation media in the optical drive. What would be the most likely action the technician should perform next?

Change the boot sequence in the BIOS.*

Flash the BIOS for a firmware upgrade.

Change clock speeds in the BIOS.

52. What are three common solutions for a PC that displays an IP address starting with 169.254.x.x? (Choose three.)

Turn on the device that is acting as a DHCP server.*

Enable the client machine to receive an IPv4 address automatically.

Reenter the IPv4 address on the DHCP server.

53. Which built-in BIOS diagnostic test would a technician run to check a computer boot problem?

54. What are three features of GPS on mobile devices? (Choose three.)

55. In Windows 7, which path will give access to parental control?

56. A user calls the help desk reporting that a laptop with Linux freezes on startup and displays kernel panic. What could cause this problem?

A driver has become corrupted.*

GRUB or LILO has been deleted.

GRUB or LILO has been corrupted.

An application is using a resource that has become unavailable.

57. A user notices that a mobile device is draining power faster than is normal. What are three causes of quick battery drain? (Choose three.)

The airplane mode is turned on.

An app is using too many resources.*

An app is not compatible with the device.

The device is roaming between call towers.*

The display is set to a high level of brightness.*

The device is connecting over a VPN.

58. Drag the statements on the left to the mobile OS that they describe on the right. (Not all targets are used.) 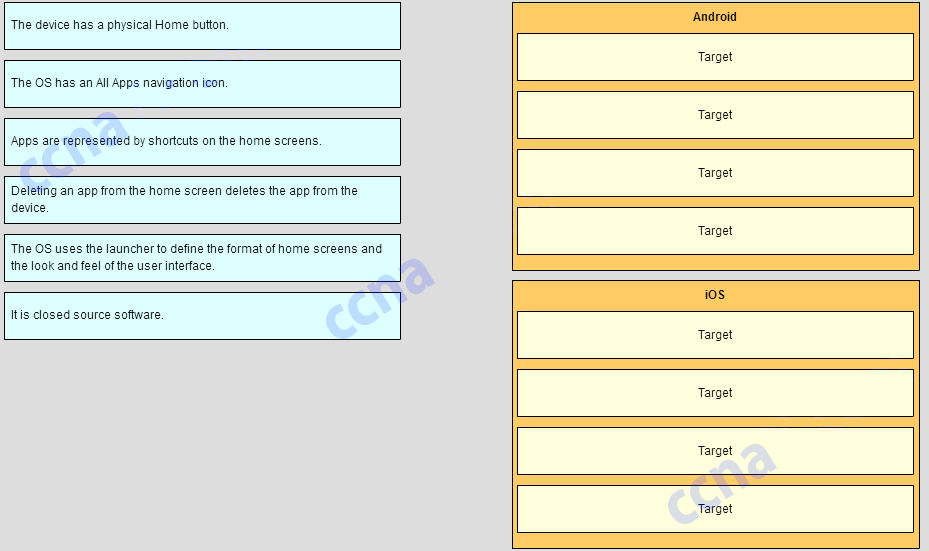 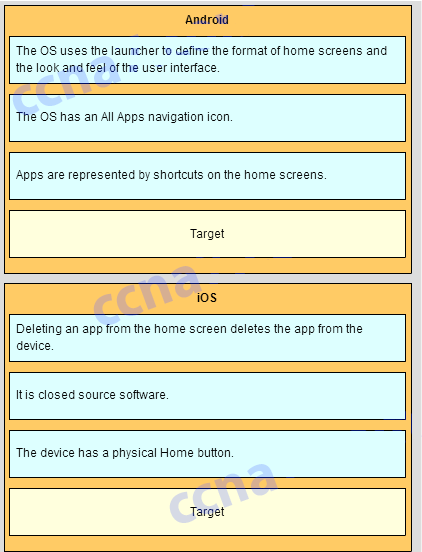 59. Drag the description to its matching cable type.

60. Match the computer problem with the area of the system affected by the problem. 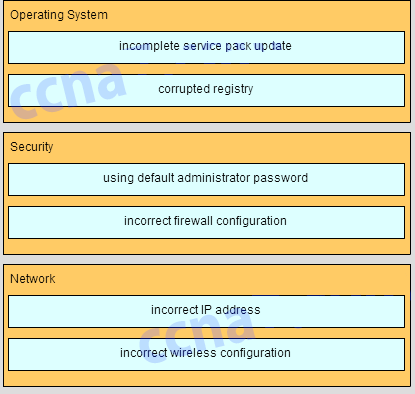