1. What three voltages are commonly provided by the power supply to the various components inside the computer? (Choose three.)

2. Hard drives in a grocery warehouse keep failing because of the adverse warehouse environment. What would be a possible solution for this high failure rate?

Install an SSD drive in each computer.*

Install a more powerful power supply in each computer.

Install an antistatic mat under each computer.

Install each computer in a specialized high airflow case.

4. Which type of interface should a customer choose if connecting a single cable from a Microsoft Windows computer to output both audio and video to a high definition television?

5. Refer to the exhibit. To what input device would the cables attach? 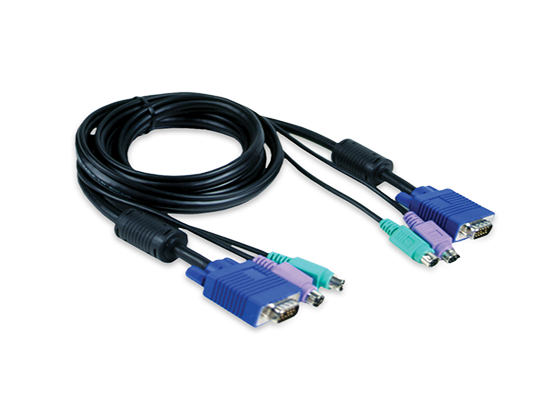 6. A desktop user has requested the ability to easily transfer photos from a camera SD card to a computer. Which device can be installed on the desktop computer to fulfill this request?

7. Which is the correct procedure to put out a fire with a fire extinguisher after the pin is pulled?

Aim just above the flame, squeeze the lever, and sweep from side to side.

Aim at the base of the flame, squeeze the lever, and sweep from side to side.*

Aim directly at the center of the flame, squeeze the lever, and sweep from side to side.

Aim just above the flame, squeeze the lever, and sweep from the top to the base of the flame.

8. Which measure can help control RFI effects on wireless networks?

Ensure the humidity and temperature levels are set as low as possible.

Ensure the wireless network is on a different frequency than the offending source.*

Ensure each wireless NIC is configured to operate at different frequencies from all other wireless NICs.

9. What can be tested with a digital multimeter?

quality of electricity in computer components*

10. Which disk management tool scans the critical files of an operating system and replaces the corrupt files?

11. Which action can reduce the risk of ESD damage when computer equipment is being worked on?

working on a grounded antistatic mat*

lowering the humidity level in the work area

moving cordless phones away from the work area

keeping the computer plugged into a surge protector

12. When a used CPU is being installed, what two items should be used to clean the top of the CPU and the base of the heat sink before applying thermal compound? (Choose two.)

13. A technician is troubleshooting a problem where many websites return a “certificate not valid” error. The technician notices that the date and time are not current and resets these to the correct settings. The previously inaccessible websites are now accessible. However, when the computer is restarted the same problem reoccurs. What can the technician do to prevent the date and time from resetting?

Change the power settings in the BIOS.

14. Which two hardware features would a technician monitor within the BIOS if a computer was suspected of overheating? (Choose two.)

15. What component can be replaced and upgraded on a PC to increase the data processing speed?

16. What are two effects of not having a preventive maintenance plan for users and organizations? (Choose two.)

17. Which three actions should be part of a regular computer preventive maintenance plan? (Choose three.)

removing dust from fan intakes, the power supply, and peripherals*

installing more RAM in the machine

18. If a technician is unable to create a backup of data on a customer computer, what three pieces of information should the technician include on the liability release form signed by the customer before beginning work? (Choose three.)

a description of the problem

the steps required to resolve the problem

permission to work on the computer without a current backup available*

a release from liability if data is lost or corrupted*

the components used in the repair

a description of the work to be performed*

19. What is the first step in the troubleshooting process?

Implement a quick procedure to solve the problem.

Ask the user direct questions about the issue.*

Create a plan of action to propose to the user.

Establish a theory for the cause of the problem.

20. After performing a preventive maintenance on a PC, the technician powers on the PC only to find that nothing happens. What is the most likely problem?

The computer is not plugged into the AC outlet.*

The power supply voltage switch is set to the incorrect voltage.

The technician forgot to reset the BIOS settings.

The CPU has not been reinserted properly.

21. Which statement describes a characteristic of a network operating system?

A network operating system shares files and folders on a small network with limited security.

It typically is used in SOHO environments.

It supports a limited number of users.

22. What technology was created to replace the BIOS program on modern personal computer motherboards?

23. On which two occasions is it most likely that a technician will have to perform a clean operating system installation if a backup has not been performed? (Choose two.)

The existing operating system is corrupted.*

The computer is being moved to a different network.

A new replacement hard drive is installed in a computer.*

24. Which key or key sequence pressed during the boot process will allow a user to start a Windows PC using the last known good configuration?

25. In which folder are application files for 32-bit programs typically located on a computer that is running a 64-bit edition of Windows 7?

26. A technician notices that an application is not responding to commands and that the computer seems to respond slowly when applications are opened. What is the best administrative tool to force the release of system resources from the unresponsive application?

27. What does virtual memory provide to an operating system?

an increase in data storage

an increase in the speed of accessing RAM

the creation of virtual partitions on the hard drive

28. A PC technician is having trouble with a Windows-based system and wants to perform a system restore from the command prompt. What command would start this process?

Set up the virtual machines using a native hypervisor.*

Set up the virtual machines using a hosted hypervisor.

Set up the virtual machines as Windows Virtual PCs

Limit the amount of paged RAM.

Disable hyperthreading in the BIOS.

30. A company has a preventive maintenance policy that requires every computer have a new restore point created every six months. For computers using the Windows 7 operating system, how can a technician create the restore point?

From the CLI enter the command restore /cn.

31. A user notices that some of the programs that are installed before upgrading to Windows 7 no longer function properly. What can the user do to fix this problem?

Change the file system to FAT16.

Update the driver for the graphics card.

Reinstall the programs in Compatibility Mode.*

32. A network administrator has finished migrating from a peer-to-peer network to a new client-server network configuration. What are two advantages of the new configuration? (Choose two.)

The total cost of the new solution is considerably lower.

Data is more secure in the event of hardware failures.*

Individual users are in control of their own computers and network resources.

Personnel costs are lower because a dedicated network administrator is no longer necessary.

33. At which TCP/IP model layer would a MAC address be found?

34. A technician needs to add a new wireless device to a small WLAN. The WLAN is a mixture of old and newer 802.11b and 802.11g devices. What choice for the new device would provide the most interoperability for present and future growth?

35. A customer who wants to enhance home network security is shopping for devices. The sales representative recommends a device that has a hardware firewall. Which device can provide this service?

36. Copper network cables consist of pairs of wires that are twisted together. Which type of signal interference is reduced or prevented by this?

It cannot communicate outside its own network.*

It can communicate on the local network as well as on the Internet.

It can communicate with networks inside a particular company with subnets.

It has a public IP address that has been translated to a private IP address.

38. A user is configuring a wireless access point and wants to prevent any neighbors from discovering the network. What action does the user need to take?

39. A home user was successfully browsing the Internet earlier in the day but is now unable to connect. A ping command from a wireless laptop to a wired PC in the LAN is successful, but the nslookup command fails to resolve a website address. The user decides to analyze the LEDs on the Linksys router to verify connectivity. Which LED should be of main concern in this situation?

to provide secure remote access to resources on another network

41. A corporation has expanded to include multiple remote offices around the globe. Which technology should be used to allow the remote offices to communicate and share network resources privately?

42. What physical layer medium is used by DSL to provide high-speed data communications?

44. What is the function of the DNS server?

It assigns IP addresses to clients.

It accepts HTTP requests from clients.

It maps a hostname to a corresponding IP address.*

It manages the domain that clients are assigned to.

The cable is not connected properly to the NIC.

The computer has an invalid IP address.

The computer has an incorrect subnet mask.

The computer has an invalid default gateway address.*