1. What are two ways that iOS differs from Android? (Choose two.)

iOS uses an All Apps button whereas Android uses a Home button.

In iOS, the icon for an app represents the app itself. Deleting the icon in iOS deletes the app. In Android, the icon on the Home screen is a shortcut to the app.*

In iOS, folders are created by dragging one app on top of another app, but in Android folders must be created from the home screen menu.

2. What is a good source for safely downloading Android apps?

3. Refer to the exhibit. What two statements are true about the operating system screen shown? (Choose two.) 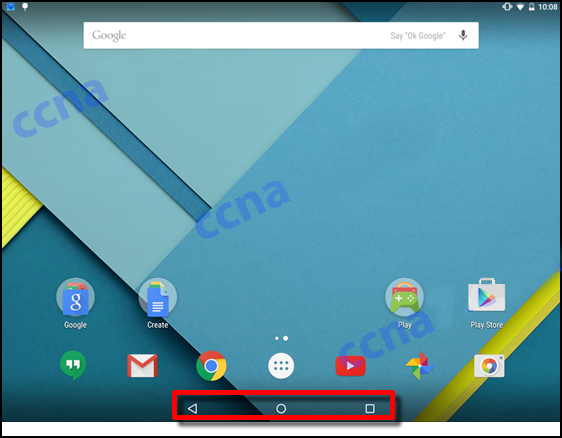 The area that is highlighted contains navigation icons.*

The area that is highlighted displays background processes and indicators.

The area that is highlighted contains the system icons.

This is an Android screen.*

This is an iOS screen.

This is a Windows Phone screen.

4. A small number has appeared on one of the apps on a user’s iOS home screen. What does this mean?

It is an alert badge that indicates the number of items requiring attention for that app.*

It indicates the number of instances of the app that are running on the device.

It indicates how frequently the app has been used within a period of time.

It indicates the number of items in the app folder.

5. What represents apps in the Windows Phone interface?

6. What is the name of the Windows Phone 8.1 digital, or virtual, assistant?

a method used to push apps to smartphones

a method for sharing data between two mobile devices

8. What is a benefit of the WEA system?

It can save lives by sending emergency text messages to mobile phones.*

It can simplify commerce by allowing payments to be made from a mobile phone.

It is a method of securing a mobile device that has been lost or stolen.

It allows a user to search for resources that are located near the current location.

9. What are two purposes of the passcode lock feature on mobile devices? (Choose two.)

to prevent unauthorized use of the device*

to erase all personal data from the device

to return the device to the default factory state

to restore and re-synchronize the device

to remotely lock the device if it is stolen

10. Which two conditions must be met for mobile device security measures such as remote lock and remote wipe to function? (Choose two.)

The device must be powered on.*

The device must be connected to a network.*

The passcode must be disabled.

The GPS locator must be enabled.

Sandboxing must be enabled.

11. Which two location data sources can locator apps use to determine the position of a mobile device? (Choose two.)

12. What are two potential user benefits of rooting or jailbreaking a mobile device? (Choose two.)

The user interface can be extensively customized.*

The operating system can be fine-tuned to improve the speed of the device.*

The root directory of the device is blocked.

The operation of the carrier cellular network may be affected.

13. Which statement is true about wireless connectivity on an Android mobile device?

If the network SSID is not being broadcast, the device will not be able to connect to the network.

When the device roams out of the range of any Wi-Fi networks, it can connect to the cellular data network if this feature is enabled.*

If a Wi-Fi network is secured with a password, the network must be manually configured on the device.

The Android OS does not support wireless connectivity that uses WPA2 security.

14. In the context of mobile devices, what does the term tethering involve?

connecting a mobile device to a hands-free headset

connecting a mobile device to a 4G cellular network

15. Which statement is true about industry standards for cellular networks?

Cell phones that use a single standard can often only be used in specific geographic areas.*

Cellular standards have made it more difficult and expensive to make calls to people that are on a different network.

Third generation cellular standards require a maximum of 1 Gb/s for devices moving slowly, such as when a user has a mobile device and is walking.

16. What will allow someone to use a cell phone for entertainment without connecting to any networks?

17. What technology enables a cell phone to be used as a hands-free device?

18. A technician is configuring email on a mobile device. The user wants to be able to keep the original email on the server, organize it into folders, and synchronize the folders between the mobile device and the server. Which email protocol should the technician use?

20. What is a purpose of the boot manager program?

It manages antivirus signature files, encryption keys, and certificates when a device boots.

It automates the POST and checks the disk for bad sectors during a boot.

It checks the validity of hardware and software on the device after a factory reset.

It allows the user to select the OS to use to boot the device.*

It allows the user to determine which apps are automatically opened during the boot process.

21. What is the purpose of signature files used to secure mobile devices and operating systems?

They contain a record of historical and pending firmware and software updates.

They contain a log of digital certificates and encryption keys associated with the user.

They contain sample code from known viruses and malware that is used by security software to identify malicious software.*

22. A file called new_resume has the following file permissions: rw-r-x–x What two facts can be determined from these permissions? (Choose two.)

Members of the group have read and execute access to the file.*

Other people have read and execute access to the file.

Group members are able to modify the file.

The user is able to read and modify the file.*

23. What is the result of doing a factory reset on a mobile device?

The operating system will be updated with the most recent updates and patches.

All user data and settings will be deleted.*

The operating system will be deleted and all user data is transferred to the Cloud.

A complete backup of the device is done and all viruses and malware are removed.

24. What tool can be used on a mobile device to display available cellular networks, location of networks, and signal strength?

25. An administrator is re-imaging a large number of Mac OS X machines. What built-in tool or command can be used to remotely boot the computers?

26. What tool or command is used in the Mac OS X to navigate the file system?

27. What command is used to open a text editor in Unix-like systems?

Both Linux and OS X devices have a service called __cron__  that runs in the background and is responsible for executing scheduled tasks.