1. Which statement is true about MAC addresses?

2. What is a characteristic of a contention-based access method?

It processes more overhead than the controlled access methods do.

It has mechanisms to track the turns to access the media.

It is a nondeterministic method.*

It scales very well under heavy media use.

The LLC sublayer interacts directly with the NIC driver software.

4. What is the purpose of the preamble in an Ethernet frame?

is used as a padding for data

is used for timing synchronization*

is used to identify the source address

is used to identify the destination address

6. Which two statements are correct about MAC and IP addresses during data transmission if NAT is not involved? (Choose two.)

A packet that has crossed four routers has changed the destination IP address four times.

Destination MAC addresses will never change in a frame that goes across seven routers.

Destination and source MAC addresses have local significance and change every time a frame goes from one LAN to another.*

Destination IP addresses in a packet header remain constant along the entire path to a target host.*

If a host is ready to send a packet to a local destination device and it has the IP address but not the MAC address of the destination, it generates an ARP broadcast.*

An ARP request is sent to all devices on the Ethernet LAN and contains the IP address of the destination host and its multicast MAC address.

When a host is encapsulating a packet into a frame, it refers to the MAC address table to determine the mapping of IP addresses to MAC addresses.

If no device responds to the ARP request, then the originating node will broadcast the data packet to all devices on the network segment.

If a device receiving an ARP request has the destination IPv4 address, it responds with an ARP reply.*

8. Refer to the exhibit. PC1 issues an ARP request because it needs to send a packet to PC2. In this scenario, what will happen next?

RT1 will send an ARP reply with its Fa0/0 MAC address.?

RT1 will send an ARP reply with the PC2 MAC address.?

SW1 will send an ARP reply with the PC2 MAC address.?

SW1 will send an ARP reply with its Fa0/1 MAC address.?

9. A host is trying to send a packet to a device on a remote LAN segment, but there are currently no mappings in its ARP cache. How will the device obtain a destination MAC address?

It will send an ARP request for the MAC address of the destination device.

It will send an ARP request for the MAC address of the default gateway.*

It will send the frame and use its own MAC address as the destination.

It will send the frame with a broadcast MAC address.

It will send a request to the DNS server for the destination MAC address.

10. What are two potential network problems that can result from ARP operation? (Choose two.)

11. A network administrator is connecting two modern switches using a straight-through cable. The switches are new and have never been configured. Which three statements are correct about the final result of the connection? (Choose three.)

The link between the switches will work at the fastest speed that is supported by both switches.*

The link between switches will work as full-duplex.*

If both switches support different speeds, they will each work at their own fastest speed.

The auto-MDIX feature will configure the interfaces eliminating the need for a crossover cable.*

The connection will not be possible unless the administrator changes the cable to a crossover cable.

The duplex capability has to be manually configured because it cannot be negotiated.

12. A Layer 2 switch is used to switch incoming frames from a 1000BASE-T port to a port connected to a 100Base-T network. Which method of memory buffering would work best for this task?

13. When would a switch record multiple entries for a single switch port in its MAC address table?

when a router is connected to the switch port

when multiple ARP broadcasts have been forwarded

when another switch is connected to the switch port*

when the switch is configured for Layer 3 switching

14. Refer to the exhibit. The exhibit shows a small switched network and the contents of the MAC address table of the switch. PC1 has sent a frame addressed to PC3. What will the switch do with the frame? 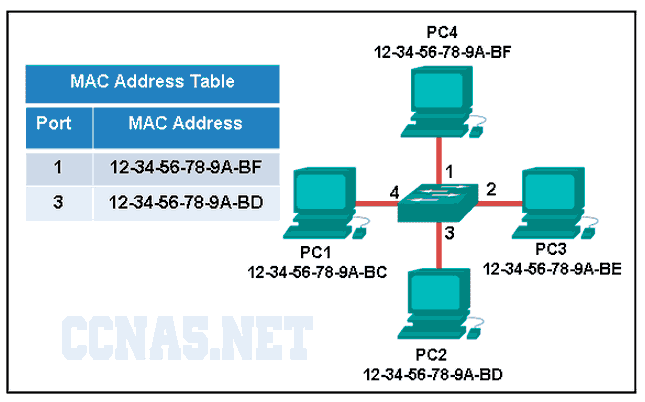 The switch cannot be configured with multiple VLANs.

An SVI cannot be configured on the switch.

A fixed configuration switch may be stackable.*

The number of ports on the switch cannot be increased.*

The port density of the switch is determined by the Cisco IOS.

16. How does adding an Ethernet line card affect the form factor of a switch?

by increasing the back plane switching speed

by expanding the port density*

by making the switch stackable

by expanding the NVRAM capacity

17. A network administrator issues the following commands on a Layer 3 switch:

What is the administrator configuring?

18. Which address or combination of addresses does a Layer 3 switch use to make forwarding decisions?

19. What statement illustrates a drawback of the CSMA/CD access method?

It is more complex than non-deterministic protocols.

21. Match the characteristic to the forwarding method. (Not all options are used.) 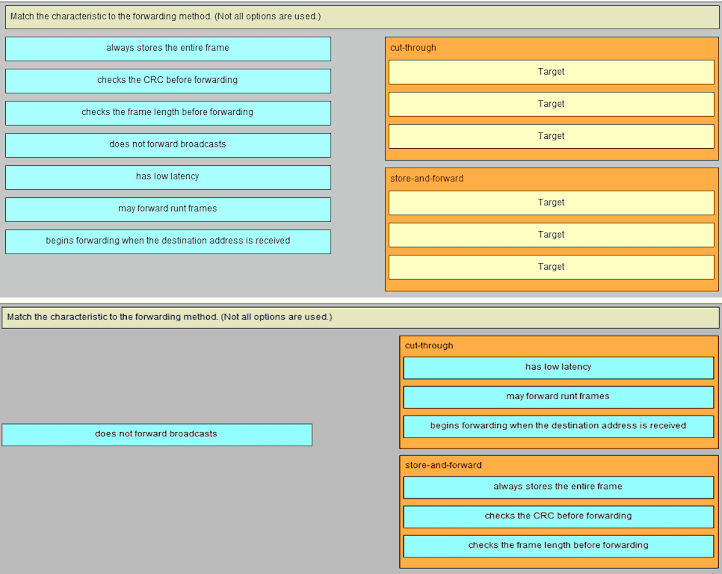 22. Match the seven fields of an Ethernet frame to their respective contents. (Not all options are used.) 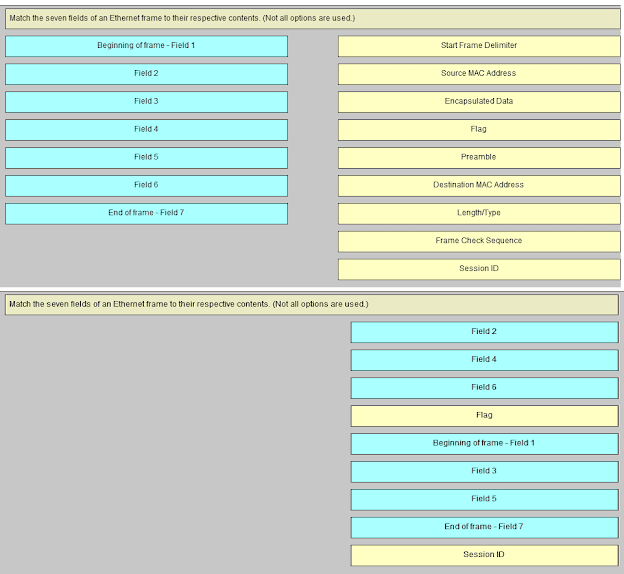 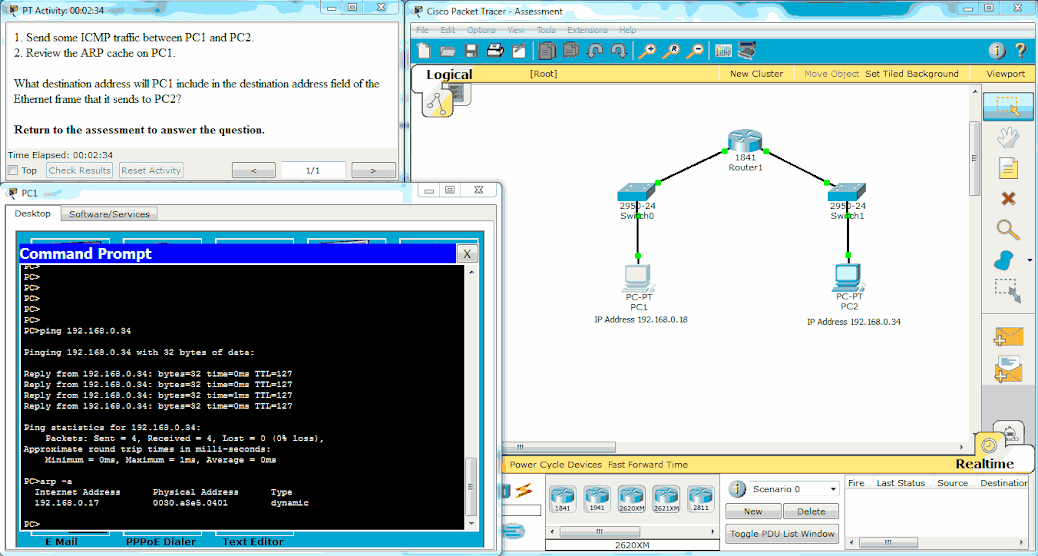 Open the PT Activity. Perform the tasks in the activity instruction and then answer the question.