1. Which network design consideration would be more important to a large corporation than to a small business?

3. How should traffic flow be captured in order to best understand traffic patterns in a network?

when it is on the main network segment only

when it is from a subset of users

4. A network administrator checks the security log and notices there was unauthorized access to an internal file server over the weekend. Upon further investigation of the file system log, the administrator notices several important documents were copied to a host located outside of the company. What kind of threat is represented in this scenario?

5. Which two actions can be taken to prevent a successful attack on an email server account? (Choose two.)

Never send the password through the network in a clear text.*

Never use passwords that need the Shift key.

Limit the number of unsuccessful attempts to log in to the server.*

6. Which type of network attack involves the disabling or corruption of networks, systems, or services?

7. A network administrator has determined that various computers on the network are infected with a worm. Which sequence of steps should be followed to mitigate the worm attack?

8. What is a security feature of using NAT on a network?

allows external IP addresses to be concealed from internal users

allows internal IP addresses to be concealed from external users*

denies all packets that originate from private IP addresses

denies all internal hosts from communicating outside their own network

9. Refer to the exhibit. Baseline documentation for a small company had ping round trip time statistics of 36/97/132 between hosts H1 and H3. Today the network administrator checked connectivity by pinging between hosts H1 and H3 that resulted in a round trip time of 1458/2390/6066. What does this indicate to the network administrator? 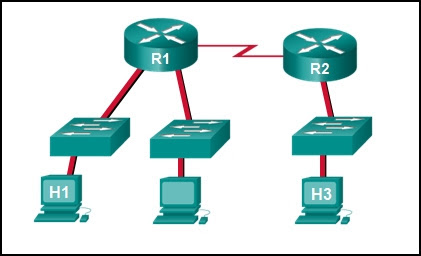 Connectivity between H1 and H3 is fine.

H3 is not connected properly to the network.

Something is causing interference between H1 and R1.

Performance between the networks is within expected parameters.

Something is causing a time delay between the networks.*

10. When should an administrator establish a network baseline?

when the traffic is at peak in the network

when there is a sudden drop in traffic

at the lowest point of traffic in the network

at regular intervals over a period of time*

11. Refer to the exhibit. An administrator is trying to troubleshoot connectivity between PC1 and PC2 and uses the tracert command from PC1 to do it. Based on the displayed output, where should the administrator begin troubleshooting? 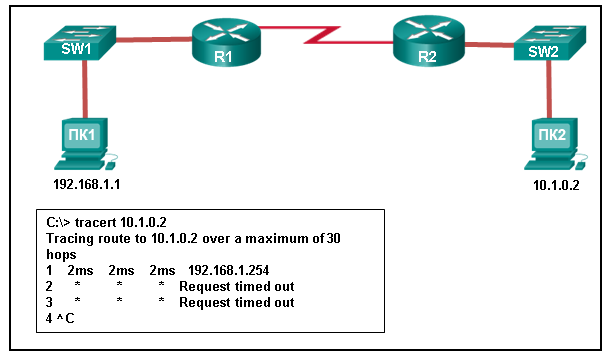 The network administrator suspects a virus because the ping command did not work.

The network administrator wants to verify the IP address configured on router R2.

The network administrator wants to determine if connectivity can be established from a non-directly connected network.

13. Which statement is true about CDP on a Cisco device?

The show cdp neighbor detail command will reveal the IP address of a neighbor only if there is Layer 3 connectivity?.

To disable CDP globally, the no cdp enable command in interface configuration mode must be used.

CDP can be disabled globally or on a specific interface?.*

Because it runs at the data link layer?, the CDP protocol can only be implemented in switches.

14. What is the purpose of issuing the commands cd nvram: then dir at the privilege exec mode of a router?

to direct all new files to the NVRAM

to copy the directories from the NVRAM

15. If a configuration file is saved to a USB flash drive attached to a router, what must be done by the network administrator before the file can be used on the router?

Convert the file system from FAT32 to FAT16.

Edit the configuration file with a text editor.*

Change the permission on the file from ro to rw.

Use the dir command from the router to remove the Windows automatic alphabetization of the files on the flash drive.

16. Which command will backup the configuration that is stored in NVRAM to a TFTP server?

17. Which two statements about a service set identifier (SSID) are true? (Choose two.)

tells a wireless device to which WLAN it belongs*

consists of a 32-character string and is not case sensitive

responsible for determining the signal strength

used to encrypt data sent across the wireless network

18. What do WLANs that conform to IEEE 802.11 standards allow wireless users to do?

use wireless mice and keyboards

19. Which WLAN security protocol generates a new dynamic key each time a client establishes a connection with the AP?

With SSID broadcast disabled, an attacker must know the SSID to connect.*

An attacker needs physical access to at least one network device to launch an attack.

21. Fill in the blank. Do not use abbreviations.

The show version command that is issued on a router is used to verify the value of the software configuration register.?

VoIP defines the protocols and technologies that implement the transmission of voice data over an IP network.

23. Fill in the blank. Do not use abbreviations.

The show file systems command provides information about the amount of free nvram and flash memory with the permissions for reading or writing data.

24. Open the PT Activity. Perform the tasks in the activity instructions and then answer the question.

How long will a user be blocked if the user exceeds the maximum allowed number of unsuccessful login attempts?